Statement on 50 person cap on Churches

Statement on 50 person cap on Churches

Churches across the Republic of Ireland are still awaiting information on the announced protocol between the Government and religious bodies about the numbers that may attend religious services, especially in large buildings.

The new Northern Ireland advice is that the number should calculated on the basic of proportionality to the size of each Church whereas in the Republic of Ireland a blanket cap of 50 people is still in place.

This limit been working, albeit with some difficulty, at weekday Masses since 29 June.  Priests around the country are concerned that for Sunday Mass – even with multiple Masses – the 50 people cap for each Mass would mean turning many people away or having them remain outside where social distancing is more problematic.

The photo shows how this Dublin Church has been kitted out with clear indications of social distancing with stewards in place to monitor adherence to the norms.  It shows an ambiance far different to what is authorised in other sectors. 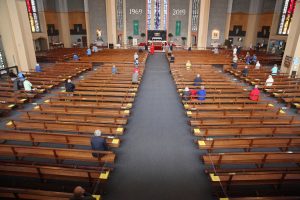