In 1866 the Lourdes Ecclesiastical Authority declared that Our Blessed Lady had appeared to St. Bernadette at the Grotto in 1858.  From this date until the end of the century, there are no records of any group from Dublin travelling to the Shrine, although clergy and laity of the Diocese were no strangers to Lourdes. The first French National Pilgrimage to Lourdes took place in 1872 in which 25,000 pilgrims were present.  The turn of the century saw a great increase in the numbers of Irish Pilgrims to the Shrine. Fr. William Ring OMI, Superior, Inchicore, was responsible for advancing the Devotion of Our Lady of Lourdes in Ireland and instrumental in organising the first Dublin Pilgrimage to Lourdes.

From 1902, Irish pilgrims travelled from Inchicore to Lourdes and Rome, in remarkable numerical strength, despite the cost of travel in those days. In 1913, the Irish Hierarchy organised a National Pilgrimage and many priests and laity from the Dublin Diocese helped in its organisation. Canon Lockhart of Glasthule was General Secretary of the 1913 Pilgrimage. A total of 2,187 pilgrims travelled to Lourdes, of which, 363 were from Dublin. One pilgrim, Grace Maloney from Co. Clare was cured of a tubercular femur during this Pilgrimage. Subsequently, Canon Lockhart and Canon Turley of Dolphin’s Barn were prominent in promoting devotion to Our Lady of Lourdes. Canon Turley was also an important member of the 1933 National Pilgrimage. However, it was well into 1947, in the period after the war, before organised Pilgrimages began to arrive from Ireland to the shrine.

In late 1948, His Grace, Archbishop John Charles McQuaid initiated the idea of the first Dublin Diocesan Pilgrimage to Lourdes and appointed Fr. Gerard Gough, who had a long association with Lourdes, as it’s first Director. His Grace outlined his proposal in a meeting with Fr. Gough and Mr. John Bolger regarding the route, numbers and air transport for the sick. He advised them that the Lourdes Authorities had been contacted and were ready to receive the pilgrims. He appointed Thomas Cook as travel agents. The fare was €33 for five full days in Lourdes.

On Monday morning August 8th 1949, the first group of pilgrims, including 38 sick, gathered together in St. Andrews Church, Westland Row for a special Mass at 9 am presided over by Archbishop McQuaid. The Archbishop gave his blessing to the pilgrims before they left for special trains to Dun Laoghaire to embark on the Streamer SS Princess Maud for Holyhead. They continued on to London for an overnight stop. Continuing the next day for Folkestone and Boulogne and then by non-stop train to Bordeaux. Here, there was a short stop for Mass in the Cathedral and then on to Lourdes, arriving several hours later. The journey took almost two and a half days.

The second group left in the evening after Benediction in St. Andrews Church Westland Row, for Dun Laoghaire and Holyhead.  They had a stopover at Crewe, to collect containers of boiling water to make tea and collect sandwiches. It was then non-stop from Crewe to Paris, where the pilgrims stayed overnight.  They attended Benediction at the Shrine of Our Lady of the Miraculous Medal in Rue de Bac, Paris, in the evening and they continued on the ten-hour journey to Lourdes the next day.

On Tuesday August 9th, a specially equipped Sabena Skymaster carrying 44 passengers, most of whom were stretcher cases, left Dublin Airport at 6.15 a.m. for the recently opened Tarbes Airport near Lourdes. Fr. Gough accompanied His Grace the Archbishop on this, the first Diocesan flight to Lourdes, which took four hours.  The plane returned to Dublin to fly the remaining pilgrims and sick to Lourdes. Each flight had a priest, doctor and nurses in attendance for the journey.  On arrival in Tarbes, they were taken by motor coach to the Accueil to join up later with the 900 other pilgrims, who had taken the overland route. It was the largest Pilgrimage to leave Ireland since 1939.

Ever since, except for 1953 when “the General Workers Strike” in France prevented the pilgrims from reaching Lourdes, and the COVID-19 Pandemic 2020/21, the Diocesan Pilgrimage has continued to travel to Lourdes every year. 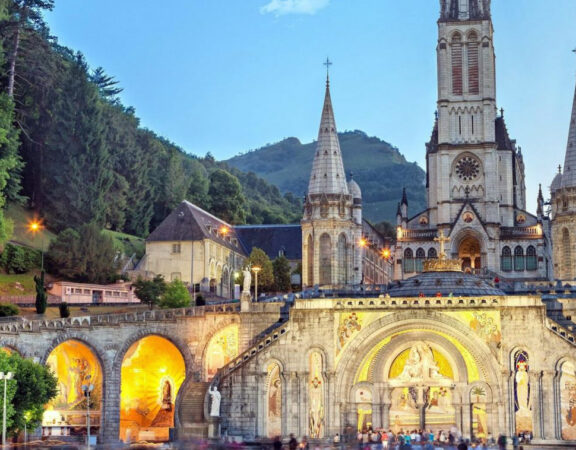