The altar used by Pope Francis when he celebrated Mass in the Phoenix Park in Dublin has found a permanent home in a North Dublin parish.  Parishioners in Bonnybrook in Dublin will be worshipping at the altar used at the Papal Mass  when their newly refurbished Parish Church reopens this weekend.

Significant works on the 50-year-old building have just finished. Appropriately, the theme for the weekend celebrations is “New Beginnings.”  Archbishop Diarmuid Martin will join parishioners to celebrate on Saturday evening.

The St. Joseph the Artisan Church first opened its doors in Dublin 17 in 1969 and in that time only minor works were carried out on the building.    The Church had to be closed for five months during the renovation process. Parish Priest Fr. Jones is hopeful that the new sacred space will encourage many people back over this special Golden Jubilee year for Bonnybrook parish and in particular to see the altar and ambo used by Pope Francis.

They were created for the closing Mass of the World Meeting of Families by the Specialist Joinery Group, based in Maghera, Co. Derry.  Run by John Bosco O’ Hagan, he and his sister will dress the altar at Saturday’s Mass following its consecration by Archbishop Martin. When first commissioned to make the furniture for the sanctuary in the Phoenix Park, John Bosco said it was “without doubt”  the most important project that we will do in our lifetime;  “Everything is to be quite simple. It is all straight lines and a simple manufacture. There is nothing elaborate about the whole thing. The Pope is a simple man and he seems to live a very simple life, so the furniture is simple as well.”

Work on the Bonnybrook Church began over two years ago and would not have been possible without the support of the Gubay Foundation and the Diocesan Support Fund, Share as well as support from the local community. As well as the improved Sanctuary area,  internal walls, which until now were exposed breeze blocks, have all been insulated as has the roof. New windows have been put in as well as a new floor and the electrical wiring has been upgraded.

With the new-look Church comes new invitations to participate in parish life. Moderator of the Parish,  Fr. Joe Jones said they are starting a new ministry group “Care for the Earth Ministry” encouraging an eco-friendly approach to parish life and asking people to be more conscious of ways to care for the earth.  Parishioners are invited to get involved in many other ways, to join the choir, the baptism team, the funeral team, to become a Eucharistic Minister or help with the Golden Jubilee celebrations, which will continue throughout the year.

Parishioners from the local grouped parishes of Prioswood and Darndale who work closely with Bonnybrook will also be taking part in the weekend celebrations and the Golden Jubilee Year.

In his homily,  Archbishop Diarmuid Martin said “New beginnings” in parish life is about mirroring that loving care of Jesus and witnessing it in our community.  You can never be just an individualist Christian.  Believing Christians belong to a community, a special community forged by the celebration of the Eucharist, the Mystery of faith and of God’s love.   Gathered around the Lord’s Table we renew ourselves and bring his saving message to others.  At the end of Mass, we are sent out to “glorify God by the way we live”.

It would be amiss for me not to recall that this parish has had its dark moments by the failures of the Church in dealing with the abuse of young people by clergy.  What saddens me most is how Church leadership failed, where families who suffered abuse pointed to the right response.  The simply asked that no other family or child would have to undergo what happened in their family. They were not heard.   We can never bury that hurt.”

“New beginnings” means renewed community.  The parish can be a place where strong community addresses the challenges and the hurts of today, especially of young people.  It is sad to note, for example, in our Dublin of today the numbers of young people who die through drug related causes.  We have to save our young people from a drug culture by providing them with opportunities.  We have to reach out to young people when the fall and not allow them to be trapped forever.

We have as a community to show that we reject violent attempts to impose drug rule.  Just as Jesus rejected the life style of the despots and dictators, the corrupt and the unscrupulous of his time, we have to say a strong and visible “no” to the despicable exploitation and violence of drug lords and merchants of death.  We cannot overlook the evil of such violence.” 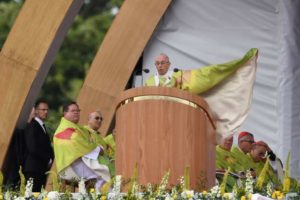 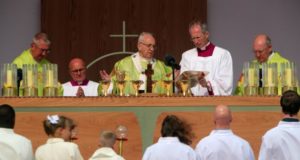 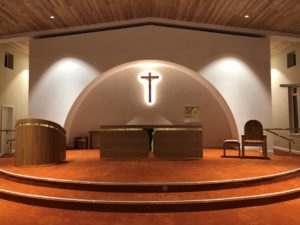