Mass of the Holy Spirit
on the Occasion of the Commencement of the Michaelmas Law Term
St Michan’s Church, Halston Street, Dublin: October 3, 2022

I am very happy to be with you today to celebrate this Mass at the commencement of the new Law Term. In doing so, I am giving thanks for your work as lawyers and judges, and asking God’s blessing upon you, and those you work with, and those for whom you advocate. I would like my first word to you today to be one of encouragement. In gathering for this Mass, you express your identity as members of a noble, worthy, and dignified profession, and you keep before you the wide perspectives of Christian jurisprudence, with its threefold vision of the law of God, the law of reason, and the law of the land. Today, this threefold vision, is not always understood or appreciated. However, you do not need me to provide examples; you appreciate keenly that the law is about much more than regulation and order. To be concerned about law, is to be concerned about the nature of our society and our world; it is to be concerned about what is of value and worthwhile in the lives we share with each other in this land, and indeed in our Common Home, to use the insightful expression that Pope Francis employs to speak of our shared planet in these times of significant global and environmental change. In this perspective then, I would like to reflect on two questions with you, in the hope of bringing into renewed focus two issues which are easily blurred or pushed to the margins: the renewal of the identity and responsibility of lay people in the Church, and secondly, the contribution of a profession, as skilled and specialised as yours, to that renewal.

The Second Vatican Council proclaimed: “…The mission of the Church is not only to bring women and men the message and grace of Christ, but also to penetrate and perfect the temporal sphere with the spirit of the gospel…The laity must take on the renewal of the temporal order as their own special obligation” (Decree on the Apostolate of the Laity, 5 and 7).

The temporal order is the arena where you live out your vocation as lawyers and judges—from the complex and vast world of politics, economics, banking, boardrooms, industry, education, media, and technology, even the arts and sport, and also—as you know so well, the sphere in which more people from deprived socio-economic backgrounds are to be found in numbers that far exceed their proportion of the population of our country. Competent lay people—not clergy or religious—are responsible for these spheres of activity. (see Lumen Gentium 36ff; Gaudium et Spes, 36, 42, 56 and 76)

It is these concrete areas of life that call out to be renewed. This can only be carried out effectively by dedicated laywomen and laymen. Why? Because it is above all the specific vocation of lay persons to carry out and to arrange temporal affairs according to the will of God, to seek the kingdom of God which has a scale of values, and set of priorities, that the world does not always understand. In your private, family and legal lives you are called to be witnesses for Christ and to manifest Him to others. With the virtues of faith, hope and love, you are asked to strive for just laws in society, and to be like leaven for the sanctification of the world. The laity have to permeate and perfect the temporal order with the spirit of the gospel. (Lumen Gentium, 31; Code of Canon Law, c 225 §2) By naming this witness their specific vocation, the Second Vatican Council and the Code of Canon Law make it abundantly clear that the temporal order is not left to the laity as if it were in some way a second best. Only a lay person can fulfil this role.

How does all this relate to the work of the legal profession? It would, of course, be a travesty to think that the legal profession deals only with technical and juridical issues. You also deal with people in the perspective of a worthy societal order. Human beings by our nature have a dimension of weakness. When any of us fail we need a modicum of mercy. In the Book of Ecclesiasticus, we read: “mercy is welcome in time of trouble like rain clouds in time of drought (Eccl 35:24). The Old Testament prophet, Micah, puts before us in today’s first reading the call to embrace a life of virtue: we must do justice, love steadfastly and walk humbly with our God. (Mic 6:8). Human law is at the service of love and justice.

Justice is essential not only for the proper ordering of society, but also for human wellbeing, and a deeper sense of personal and community safety and worth. For Cicero justice consisted in giving each her or his due. Augustine emphasised the fundamental meaning of justice for a political system: “If justice is set aside, what are kingdoms but a great band of robbers? For what are bands of robbers, but little kingdoms. The band itself is made up of men, which is ruled by authority of a ringleader, is knit together by a pact of confederacy, and divides the booty according to a firm agreement among them.” (City of God, IV, 4) When this happens, the values that are the basis of justice—freedom, equality, the innate dignity of every human being, protection of the weakest, and human rights—may be arbitrarily dismissed by those who govern.

Every person knows failure, and the Christian is no exception. Our human weakness, a dimension of us that was fully embraced by Christ, is constitutive of every person, and gives us a sensitivity towards those who fail. It is a very shallow view of the human, and indeed of the Christian God, that would deny this. Pope Saint John Paul II, who campaigned vigorously for human rights and justice, recognised that “the experience of the past and of our own time demonstrates that justice alone is not enough, that it can even lead to the negation and destruction of itself, if that deeper power, which is love, is not allowed to shape human life in its various dimensions.” He continued, “it has been precisely historical experience that, among other things, has led to the formulation of the saying: summum ius, summa iniuria [greatest justice, greatest injustice].” (Dives in Misericordia, 12) Love does not replace justice; justice is the minimal measure of love. Love and mercy are fundamental conditions for communal life and the co-existence of people. Indeed “a world from which [mercy and] forgiveness were eliminated would be nothing but a world of cold and unfeeling justice, in the name of which every person would claim his or her own rights vis-à-vis others.” (Dives in Misericordia, 12) As first formulated by Pope Saint Paul VI, and repeated by his successors, it is, therefore, necessary to construct a “civilisation of love” upon the foundation of a culture of justice. (“Closing Comments for the Jubilee Year 1975”; Pope Benedict XVI, Caritas in Veritate, 2 and 6).

Undoubtedly, there are some who would argue that mercy has no place in the design of the legal system. Mercy as the pathway to recovery is part of the newness of Jesus. It is the essence of the gospel, the key to Christian life, and the true gift of our faith to the world. The shortcomings of Christians in this respect over the ages, have neither diminished the need for mercy, nor made its proclamation any less urgent. Mercy tempers justice with love. We live in a world where some people demand an eye for an eye and a tooth for a tooth. The overall confidence and respect for the legal and judicial system in our country bears witness to your competence as practitioners of justice. This is something for which the citizens of our county, and those who seek refuge among us, may be truly grateful. Unfortunately, it is not the case in every land.

In the biblical tradition, the prophets called the societies in which they live to act justly and with fairness, especially towards the poor. Today also, for the poor, and those on society’s edge, the legal system can be overpowering with its conventions, and a language culture all of its own. For the people who enter this unfamiliar world, you are not only the face of the State, but probably also the voice of society. When he read from the prophet Isaiah in his home synagogue, Jesus chose the passage which spoke of proclaiming new sight to the blind (see Luke 4:18). May the Spirit of the Lord which came upon Jesus, come upon us all, and open our eyes to the world and its weakness with eyes of mercy, and eyes of hope.

Come Holy Spirit, fill the hearts of the faithful and enkindle in them the fire of your love! 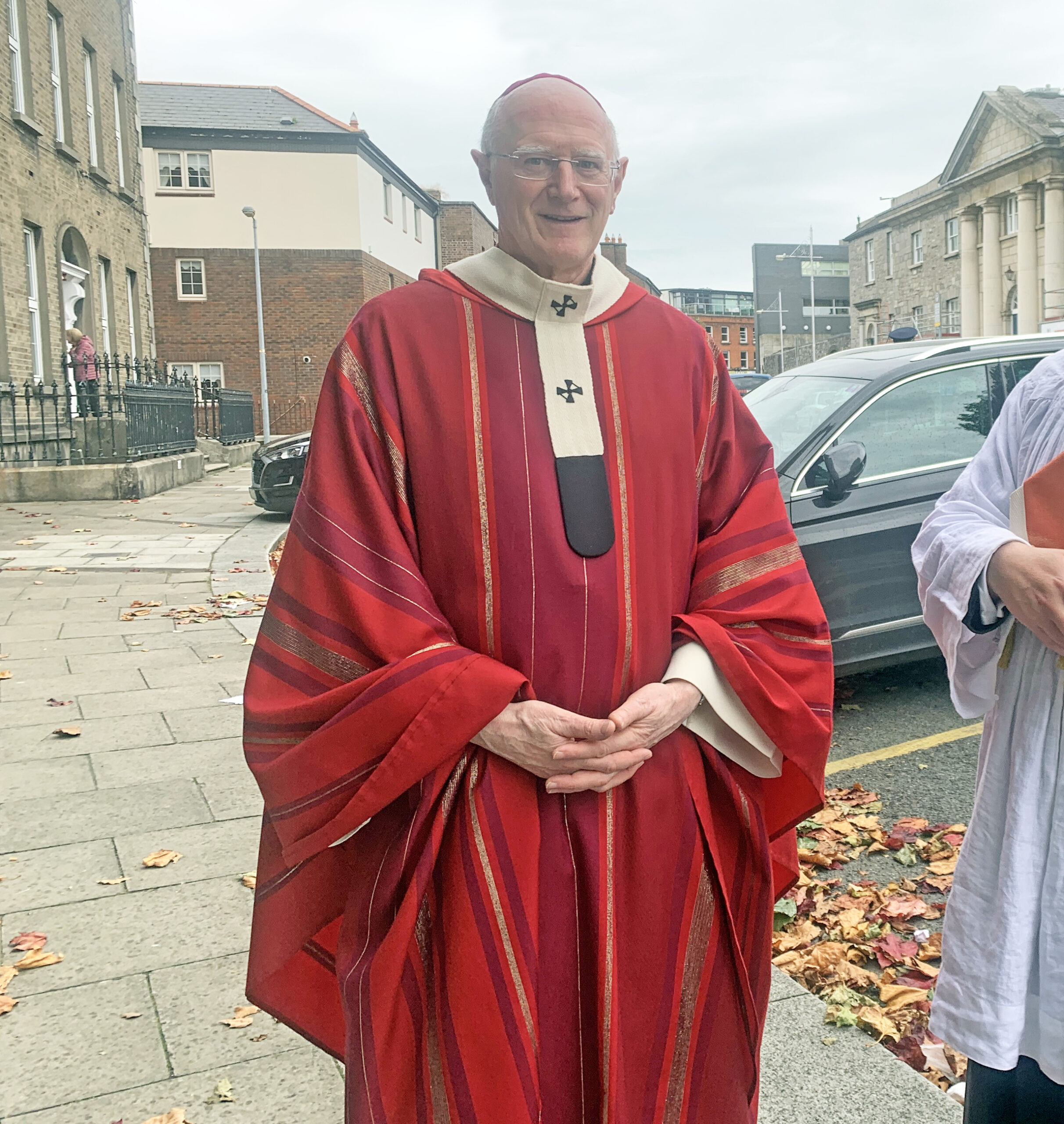