I welcome you all — priests, religious and laity – who have joined us this evening for this ceremony of the conferral of the Pallium. In particular, I welcome the Apostolic Nuncio, Archbishop Jude Thaddeus Okolo, and Bishop Denis Nulty, Bishop of Kildare and Leighlin. My thanks to each of you for participating in this evening’s joyful celebration.

The pallium — which is conferred at this Mass — is a sign of the communion which exists between a metropolitan church, as embodied in its bishop, and the chair of Peter.  By the simple yet solemn act of placing the pallium on my shoulders, you Archbishop Okolo, have demonstrated the singular and important service you offer to the Church as a representative of the Holy Father, Pope Francis. The pallium is a sign of the bond we in Dublin share with the successor of Peter; by your presence this evening, you make real the personal character of that bond.

On the Feast of Saints Peter and Paul, as he blessed the pallia, Pope Francis reminded those present that, “this sign of unity with Peter recalls the mission of the shepherd who gives his life for the flock. It is by giving his life that the Shepherd, freed from himself, becomes an instrument of liberation” for his brothers and sisters.

This evening also, I want to pay particular tribute to the bishops, clergy and religious whom I have the honour to work alongside and who persevere in faithful service in what are, in some ways, challenging times but also exciting ones, times when the new directions of God have to be discerned and discovered.  In Jesus — the Living Bread, as He calls himself in this evening’s Gospel (John 6:51), we find the strength to walk through life with vigour and conviction; in Him we come to the realisation that a faith, which seeks only to maintain, is not enough.

One of the earliest and most striking images of early Christian art is the image, from the catacombs of Santa Priscilla in Rome, of the shepherd carrying the lamb. The pallium, this simple white woollen stole edged in black and worn over the shoulders, evokes the image of a lamb being carried by the shepherd. A profoundly biblical image, it evokes Moses and David, two great biblical figures called to serve God’s people precisely because they were shepherds.  It asks me, and the entire Church that I serve, to remember that we are a community which goes after the lost sheep, not only those who have strayed but those who are ignored, forgotten or overlooked.  The task is not just to find them and bring them home, but to lift them up high, to shoulder level, where they can begin to see and live a new life, the life made possible by the one who is Himself ‘the living bread.’

As the Gospel, the First Reading of today’s Mass is situated in the desert.

Like the Hebrews before him, Elijah flees into the desert to escape the wrath of a powerful ruler.  His struggle with Jezebel has left him exhausted, and his victory over the prophets of Baal means that he is now exposed to the full viciousness of this ruthless queen.  Elijah is spent.  He can do no more.  He is on the cusp of giving up. It is precisely at that low point that the Lord comes to him, not in some stunning intervention, but in the gentle act of waking His prophet, and giving him the simplest — but most essential — of food: bread and water.  The desert is the place of essentials, the place where the irrelevant is stripped away, where what is vital is revealed, and we are confronted with the truth of our lives.

In the desert, like Moses before him, and Jesus after him, Elijah comes face-to-face with bread from heaven.  In a word he comes face-to-face with the presence, consolation, and call of God.  He can taste and see that the Lord is good: “…and strengthened by that food, he walked for forty days and forty nights until he came to Horeb, the mountain of God.” (1Kings 19:8)  The echoes and re-echoes will be not lost on you.

Neither is the resonance with the pandemic lost on us. With its experiences of lockdown and loss, of uncertainty and isolation, the pandemic has been very much a desert time.

Thanks to people’s resilience and solidarity, the skill and efforts of scientists — many of them hidden from public view in labs and lecture halls, the selfless dedication and commitment of healthcare staff, and the adoption of public policies designed to protect the common good, we have arrived at a point where there can be hope for a sustainable return to community life.

The Church has fully supported necessary measures to protect health and welfare.  We have encouraged the faithful to see recent restrictions on public worship a form of self-sacrifice, enabling them to perform a Christian service.  In the same way, we encourage all those who are eligible to be vaccinated, for their own good and to help to protect others.  When public worship was again permitted, our parish communities rose to the challenge of welcoming the faithful to celebrate safely and responsibly, with a scrupulous regard to numbers, social distancing and sanitisation.  In the same way, we urge everyone to be responsible in how they behave outside church, especially by complying with guidelines regarding socialising between households.

However, we also have a responsibility to ensure that the faithful have reasonable access to ‘the living bread which has come down from heaven’, to the nourishment by Word and Sacrament which not only sustains Christian living, but which brings our faith to life.  It is not to be forgotten that the Lord did not only send His angel to address a word to Elijah, but to awaken him, to give him food for his journey onwards, and to point in the direction of a deeper encounter with God. Likewise, Jesus did not only teach the crowds in the desert, he gave them bread to eat.

It has been a source of deep frustration to many families, and to parish communities, that for so many months they have been unable to celebrate the Sacraments of First Holy Communion and Confirmation.  They have been perplexed, as am I, that of all of the types of events which might give rise to mingling between households, it is uniquely these Sacraments which are prohibited under public guidelines.  In all other aspects of life, whether family celebrations of birthdays and anniversaries, or fans gathering to watch sporting events, or indeed after weddings and funerals, people are trusted and expected to observe the guidelines on household mixing.  Households are permitted to mix, in homes and in restaurants, in ways that take account of the age and vaccination status of those present. I find it difficult to explain, or justify, that it is only parents of children receiving the sacraments who cannot be trusted to observe these guidelines.

In the light of the Government’s statement yesterday, I have renewed my advice to parishes to postpone the celebration of the sacraments until September.  I can understand, however, the frustration and the resentment of those who feel that the public guidelines are unfair and discriminatory.

In today’s second reading the Ephesians are called, as followers of Christ, to practice kindness, patience, and forgiveness.  In that spirit, I look forward to a resumption of the positive engagement between the Churches and the public authorities, based on respect both for the protection of public health, and for the responsible exercise of freedom to worship by those who are drawn to receive ‘the bread of life’.

Being nourished by the bread of life, bread that is “for the life of the world,” is not an end in itself; it is a call to mission.

“The Eucharist is the vital centre of the universe, capable of satisfying [our] hunger for life and happiness,” proclaimed the then Cardinal Jorge Mario Bergoglio, now Pope Francis, in his address at the International Eucharistic Congress in Quebec in 2008.  Satisfying the world’s hunger is not just a gift of God that we receive, it is also a gift we are called to give. “When I was hungry you gave me to eat, …when I was naked you clothed me…,” said Jesus. (Matt 25:35–36).  As Saint John Chrysostom would appeal: “Do you wish to honour the body of Christ?  Do not ignore him when he is naked.  Do not pay him homage in the temple clad in silk, only then to neglect him outside where he is cold and ill-clad.” (Homilies on Saint Matthew [PL 3-4 58, 508-509])

“Taste and see that the Lord is good” was the response to tonight’s psalm.  May it be more and more the mark of our presence in, and witness to, the world.

May the Bread of Life — the Good Shepherd who gave His life for the sheep— be the contour of our lives.

Photographs from the Imposition of the Pallium on Archbishop Farrell.  Photographs taken by John McElroy 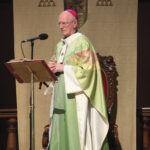 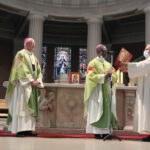 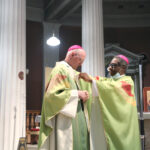 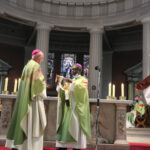 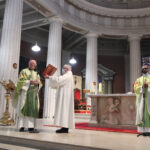 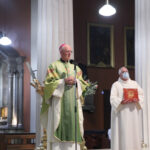 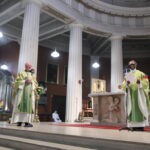 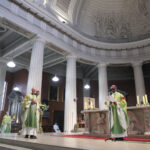 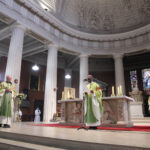 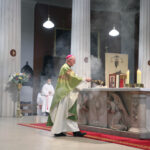 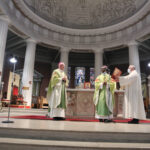 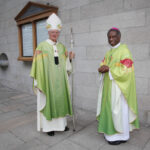 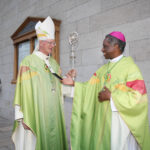 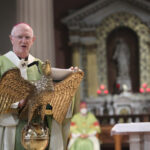