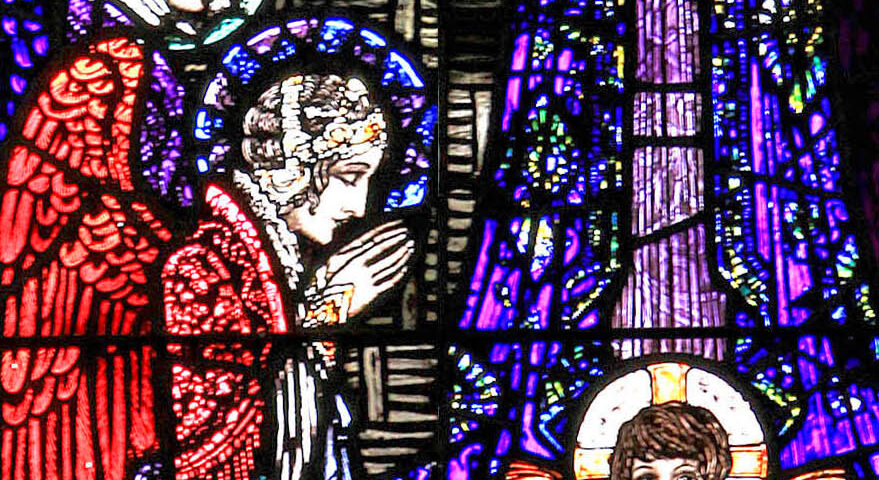 The response of the world in which we live, the reaction of our culture, is to make the story of Christmas into a fairy story: “…and they all lived happily ever after.” However, the story of Jesus, even the story of his birth, is not a “happy ever after story.” The arrival of the Wise Men, and the murder of the innocents, go hand in hand (see Matt 2:13–17). This is the truth into which the Son of God is born. The reality of Christmas stops us in our tracks. Our God, the Father of Jesus brings salvation to the world in a way we could not have imagined or expected. The Christmas carol, “O Holy Night,” in its lyrical and dramatic language, captures the hope of this child, our Saviour—“The Light of the World.”

O holy night! the stars are brightly shining,
It is the night of the dear Saviour’s birth.
Long lay the world in sin and error pining,
Till he appeared and the soul felt its worth.
A thrill of hope, a weary world rejoices,
For yonder breaks a new and glorious morn.

This beautiful carol, and the other carols we sing, are not only songs to lift our mood, they tell us of the truth and reality of Christ’s birth:

A thrill of hope, a weary world rejoices,
For yonder breaks a new and glorious morn.

What happened was not some dream. As we pray in the First Preface of Christmas, “we recognise in him God made visible, so that we may be caught up, through him, in love of things invisible.” Jesus was born like any other child, but in the stable. St Luke tells us that when the time came for Mary’s child to be born, “she gave birth to her son, her firstborn. She wrapped him in swaddling clothes, and laid him in a manger” (Luke 2:6–7). The unique Son of God, God in our flesh who became one of us not in a mansion of the rich and famous, but in the poverty of the manger. The first visitors are shepherds, among the most socially-excluded of poor night workers, who because they were considered unclean, were probably not the most frequent attenders at religious gatherings.

Those assembled at Bethlehem—and captured in our cribs—are a sign of contradiction. On the one hand, they are a sign of human weakness and fragility and, on the other, of triumph. The stable and the manger are symbolic of the first; the appearance of the angels—“glory to God in the highest and peace to people of good will” of the second. The crib brings God’s upside down world into view. The crib—and the gospels that inspire it—upend our assumptions about what is genuinely important. Bethlehem strips away that which is irrelevant, and brings about a re-think of what the world values: power, prestige, and wealth. Bethlehem does not spare us from having to attend to the essential. It is at Bethlehem that the surprising ways of God come to birth; we are confronted with God’s newness, otherness, and surprise; how he “scatters the proud-hearted, casts the mighty from their thrones, and raises the lowly.” (Luke 1:51–52)

To focus only on Christ’s coming in Bethlehem, central as this is to Christmas, is to sell Christmas short. Christmas is not a story of a distant God descending in glory, but is the story of our compassionate God who wants to touch the lives of ordinary people with His presence and glory. The real Christ is Christ right now, Christ risen from the dead. Christ did not come to remain in the past. He did not come only to be born in Bethlehem: he came to be born in us. He came that we might find him in each other, especially the poor, the vulnerable, the outsider. As Jesus says, “When you responded to the one of these, the least of my brothers and sisters, you responded to me. (see Matt 25:40)

The situation of Mary and Joseph is not so different to the situation of so many of our sisters and brothers today. What can a refugee mother and her child in Ukraine do today, while a barbarous war flows around them? Nothing. The despotic ruler does not look for advice from fleeing parents who whisk their children to safety in another country. But then, what could Bethlehem’s Child do. Nothing. How do we reconcile the 11,000 homeless, among them more than 3,000 children, with an all-powerful loving God? The answer is to be found in the paradox of Emmanuel, the name the angel gives to Jesus, a name which means, God-is-with-us (see Matt 1:23–24, Isa 7:14, 8:10). The homeless and the poor see that God, far from being distant, has suffered like them. He has come among us to set us free from pain and death forever. The answer given by the silent baby wrapped in swaddling clothes is also the answer given by Jesus on the cross. There is no other answer than to contemplate the mystery of the love of a God who out of love became a child. The Christmas story is not only the beginning of the Gospel; it is in real sense the end of the Gospel.

The Prince of Peace wishes to enter our lives. How can we let him in? How can Christ be born again in us this day? (see Matt 1:20). We may be saddened and frustrated that there seems nothing we can do to stop horrors, like the murderous war in Ukraine, any more than Mary could halt the murderous schemes of Herod. Like many people today, she had to flee with her Son. He is on the side of the innocent victims; he had to travel that road himself.

When we allow Him to born in us, he becomes the rock on which our lives are built. Christ is the steady, unshakeable foundation of hope. (see Pope Saint John Paul II, Homily for Midnight Mass, December 1997). In the end, he is our shelter, the rock on which our lives are to be built, if we are to withstand life’s constant storms, and even life’s ultimate storm, death itself.

I am inspired and humbled by the generosity of people toward those who are seeking refuge in our land, and towards those of this land for whom life has been more than difficult, and who find themselves at life’s edge. In our generosity—when we give of ourselves and of our resources, Christ comes to life in us anew. Bethlehem is no longer far away. The Word takes flesh in us. Christ is born in us and among us. This is why he came. And more: this is why he comes—to be born in us. That is the good news of Christmas, and its hope.