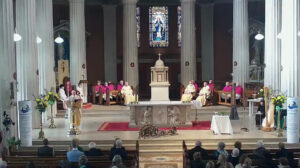 The Lord guarded me before I knew him, and before I came to wisdom and could distinguish between good and evil. He protected me and consoled me as a father does for his child. That is why I cannot be silent.

Patrick is nothing without Christ! He knows this. He has come to know it with every fibre of his being. Consequently, Patrick—in his very flesh—becomes a bridge between Christ—anima vitae eius—aman a shaol féin, and the Irish of his day, between his violent captors and Christ.

His prayer, Críost liom, Críost romham, Críost i mo dhiaidh, Críost istigh ionam … is a prayer born, not of something he read in a book, but of his experience of God’s faithfulness and mercy: “I was like a stone lying deep in the mud,” he says, “then he who is powerful came and in his mercy pulled me out, and lifted me up” (Confession §12).

However, can we tear a saint out of fifth century Wales and implant him into today’s Ireland, and more importantly into the world that has shown its face in the last three weeks?

It might be fruitful to step back a moment from the particularities of Patrick’s life, and look at Patrick’s world. The very contours of his story speak of violence, robbery, pillaging, slavery, fear, isolation, abandonment. Let us not dismiss the horror of this sixteen-year old who was first taken to Ireland as a slave, or the conditions in which, on escaping back to Britain after six years he could walk twenty-eight days through deserted country (Confession §19), or the conditions which, many decades later, he would endure in his mission (§§ 2, 3 and 14).

Patrick was brave, and courageous in the face of adversity. He was separated at a young age from so much that was familiar—his own family and homeland. His closeness to Christ, and the vibrancy of that relationship witness to his knowing first-hand the consolation, hope, and strength that come from Christ. He also knew what it was to have one’s life turned upside down: from the familiar to the strange, from security to dependence on strangers. In all this Patrick’s deep trust in Christ kept him going, as one can hear in the deep faith and closeness to Christ in the words of his ‘Breastplate’ to which we turn again and again as the touchstone of his faith and an inspiration for our own: “Christ with me, Christ before me, Christ behind me, Christ within me, Christ beneath me, Christ above me, Christ on my right, Christ on my left.”

The depth and vibrancy of Patrick’s faith still inspires. It inspires us to be more authentically ourselves, how to discern the stirring of the Spirit in our own hearts, and how to respond well to the challenges of our time and place. Patrick did not champion a style of spirituality that withdrew into an interior life, and was divorced from needs and struggles of the world in which he operated. No, the Christ who was Patrick’s Lord, brought Patrick along the way that he himself had travelled, the way that went “the second mile” (see Matt 5:41), that left one’s gift at the altar to be reconciled with those “who had something against” him (see Matt 5:23–24).

This is the Patrick who inspires us today, and whom we, and indeed all of Europe still needs. The spirit of this Patrick is captured by Timothy Schmalz’s bronze sculpture “Let the Oppressed go Free” a scale model on display in front of me which was blessed by Pope Francis earlier this year. It depicts Saint Josephine Bakhita—a native of Darfur in Sudan—opening up the gates of the underworld and allowing those enslaved by trafficking to be set free. Like Patrick, she was kidnapped and trafficked. Like Patrick, she was but a child—aged only nine. In this bronze, more than 50 individuals capture the range of trafficked victims—child brides, young beggars, those trafficked for their organs, and both men and women enslaved by and for prostitution. Today, the numbers paint a grim picture: around the world, there are over 40 million victims of modern slavery of whom 70% are women, while about 20% are minors. As heirs of Patrick’s grounded and transformative faith, we cannot remain indifferent to this global phenomenon.

Let us not fool ourselves: slavery, in particular human trafficking, is still very much a feature of our world. It frequently spikes in situations like the humanitarian crisis provoked by wars and other crises. Traffickers exploit situations where screening and identification of victims is very difficult. In these days, there is credible evidence of the exploitation of women and children, fleeing the war in Ukraine, being lured into prostitution networks across Europe. Global crises, such as the pandemic, climate change, all sort of wars and conflicts, combined with deep-rooted discriminatory policies and practices, have a disproportionate effect on individuals who are invisible or dispensable in their societies. If we hope to eliminate human trafficking, this inhumane cycle of discrimination and injustices must be broken.

In the current Trafficking in Persons’ Report (TIP)—a highly respected metric—Ireland still remains on a Tier 2 Watchlist. Tier 2 is for countries whose governments do not fully comply with minimum TVPS’s (Trafficking Victim’s Protection Acts) standards, but who are making significant efforts to come into compliance with those standards. This a source of immense shame. In this jurisdiction prosecutions are so low as to be farcical. As we commemorate St Patrick, a trafficked person, I appeal to the Government to address comprehensively the plight of the enslaved and exploited women, children, and men who have come to our shores.

Today, I also acknowledge and thank those organisations and individuals who persistently work to prevent, and ultimately dismantle, this most evil and sinful enterprise of deception, entrapment, domination and exploitation. In particular, I thank women religious who rescue, rehabilitate, and reintegrate victims of human trafficking. As a country, we need to open our eyes to what is going on around us: we need to raise awareness of this underbelly of pervasive human degradation. Human trafficking is “a deep wound, inflicted by the shameful pursuit of economic interests without any respect for the human person” (Pope Francis, 7 February 2022). For the Christian, our treatment of people becomes a measure of our fidelity to the Lord himself, he who asserted “Whoever welcomes one such little one in my name welcomes me (Matt 18:5).

Have we drifted away from St. Patrick? Not at all! As a trafficked slave, Patrick knew first-hand the underbelly of human degradation. What was inflicted on him did not determine his response. His response was determined by the flame of faith he had received in his home and in his community. It had been given and received in such a way that it stayed alight in the face of the violence, isolation, and fear that still characterise the world of the trafficker and the trafficked. “The one who gave his life for you, he it is who speaks in you,” as it says in the Confession (§ 24). Patrick could still hear the word of God beating in his heart, the echo of the Scriptures; he heard their consolation and their call, and he heard ‘the voice of the Irish’ and responded to their cry.

At the beginning of this week nine years ago, on March 13th 2013, Jorge Bergolio was elected Bishop of Rome. He made his first papal journey to the island of Lampedusa, to the thousands of migrants who had been landed there, to condemn what he famously called “the globalisation of indifference.” (Homily, July 8, 2013) As our world reels from the violence and destruction so cynically unleashed upon Ukraine, let us be inspired by the living faith of Patrick. May the openness or his heart, drive far from us all indifference and self-interest. His world was harsh; so is ours? We are shocked as its harshness, horror, and profound unfairness are revealed anew. What we considered banished to the past, is being revealed not only at the edge of Europe, but in our midst, in apartments, not only in our cities but the small towns of this land.

• St Patrick—Aspal Éireann, Pray for Us.

• Saints Cyril and Methodius—Apostles to the Slavs, Pray for Us.

• Our Lady of Fatima, Queen of Peace—Pray for Us