Homily of Archbishop Dermot Farrell for the Anniversary of the Death of Blessed John Sullivan, SJ.

Homily of Archbishop Dermot Farrell for the Anniversary of the Death of Blessed John Sullivan, SJ. 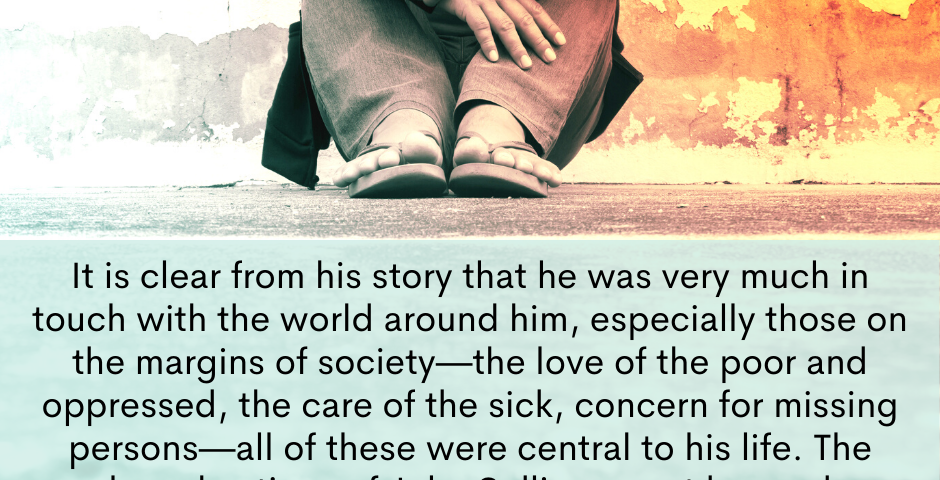 I am delighted to come here this morning to celebrate the annual Mass on the anniversary of the death of Father John Sullivan, and to mark the intertwining of the mystery of God, of John Sullivan’s life, and ours. Reading the account of his life, a story well known to you gathered here, brings to the fore the core concern of what is involved in reflecting upon and remembering the life of a person of particular holiness: namely, the witness of their life. In his wisdom, Pope Francis points out that there is “no need to get caught up in details” of a saint’s life, or even to consider them flawless (Gaudete et Exsultate 22). The fruitful question is: to what does Father John Sullivan’s life witness

The first thing that struck me was his deep faith, his trust and personal commitment.  His faith was not a platform; it was not some sort of stage to promote his own agenda.  It was a path, a journey. His faith required constant investigation and continuous journeying.  Christian faith is constant pilgrimage.  It brought John Sullivan from a privileged upbringing as the Lord Chancellor’s youngest son, through the years of his conversion to Catholicism, to priesthood in the Society of Jesus in 1907, and to a radical simplicity of life. John Sullivan as a man of strong faith who shared in the life and mission of Jesus.

Reading the story of his life, one can see the story of God intertwined therein.  Long before he came into full communion, he had developed a deep love for the poor. His privileged upbringing did not blind him to suffering and poverty.  If his work continues today to attract a growing audience, it is not because people wish to imitate his example or follow his way, but because he helps them to see their own lives in relation to the story of Jesus, as another gospel in the making.  In the words of the late Michael Ramsey, Archbishop of Canterbury at the time of the Vatican Council, they see in the saint one who has “a strange nearness of God and makes God real and near to other people” (Sermon for Feast of All Saints).  In John Sullivan, we see the weaving of the story of Jesus into his life.  His example of a way of living certainly made God real to the many people he encountered on the journey of life, especially the sick and those experiencing poverty.

Second, there is something to be learned about the nature of vocation.  He received a call within a call, reminding us that vocation is not static but dynamic, a vocation is not a once-off event. Either call does not appear to be dramatic, but more along the lines described by Saint Ignatius of Loyola “when God our Lord so moves and attracts the will that a devout soul without hesitation, or the possibility of hesitation, follows what has been manifested to it” (Spiritual Exercises 175).  In John Sullivan’s life we glimpse the gift of vocation and its mystery.

John Sullivan travelled light. He went from being “the best-dressed young man about Dublin” to been mistaken for poor man at the presbytery door by the Parish Priest of Mitchelstown.  The Letter to the Ephesians had described it as “putting off your old self and putting on Christ” 4:22).   Perhaps we are inclined to idolise John Sullivan—to imagine that we could never do what he did. But before his bold and courageous life-changing decision, perhaps what distinguished him was his way of seeing and interpreting reality. He looked at the world through a gospel lens—and in doing so saw things according to a new scale of values. He was indifferent to the things of the world, unattached to worldly values and material things. His life witnesses to the fact that the Beatitudes could really be lived and put in practice.

What would it mean if we saw in the poor, in the sick, in the missing person the face of Christ? It may not be a question of immediately reaching out in the way that John Sullivan did. But perhaps we would not be so susceptible to what Pope Francis calls “the culture of indifference.”

Third, as Pope Francis, says, “We are frequently tempted to think that holiness is only for those who can withdraw from ordinary affairs to spend much time in prayer.  That is not the case. We are all called to be holy by living our lives with love and by bearing witness in everything we do, wherever we find ourselves” (Gaudete et Exsultate, 14).  Father John Sullivan never withdrew from the ordinary affairs of life, either before his ‘conversion’ or after his ordination.  From the outset, he was very much involved in the world—as a barrister and as a priest who taught classics and religion in Clongowes Wood College.

Fourth, John Sullivan’s spirituality was not a cocoon of comfort, or a form of escape.  It is clear from his story that he was very much in touch with the world around him, especially those on the margins of society—the love of the poor and oppressed, the care of the sick, concern for missing persons—all of these were central to his life.  The words and actions of John Sullivan must be read as a manifestation of the compassionate presence of God. “The Spirit of the Lord is upon me, because he has sent me to bring good news to the poor… (Luke 4:18ff). The strength we truly need, the grace we want, is not ours but the Lord’s. John Sullivan, like St Paul understood this clearly. “So, I will boast all the more gladly of my weaknesses, so that the power of Christ may dwell in me” (2 Cor 12:9).

Finally, not all conversions are the same. Some are radical; others more gentle. Father John’s conversion to the depth of the gospel’s call resembled St Francis’s in its radicalness, but has a familial aspect similar to St Augustine’s whose mother’s faith was singularly influential. The unfolding of each vocation is as varied as the unfolding of every person’s life. It can be no other way, as vocation and life go hand-in-hand. Anything else is either oppression or illusion. Wherever we find ourselves, in whatever state in life, the same voice that spoke to John Sullivan also speaks to us.  We may not follow in the same way that he did. We may take just the first small steps.  But the MYSTERY remains: each one is called. God touches the life of each person.  But, can WE hear?   And if WE do, how will WE answer?  How will WE follow the one who comes to us and calls?