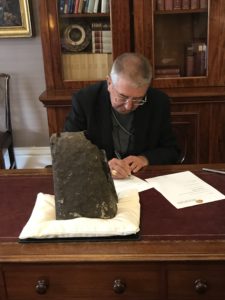 The Archbishop of Dublin, Diarmuid Martin has donated an ancient iron hand-bell, thought to date from the 8th or 9th centuries to the National Museum of Ireland.

The Knockatemple Hand-Bell has been in the possession of the Archdiocese since the 1920’s. It is believed a priest of the Pro Cathedral bought it at auction in 1915.

The existence of the  bell, the origins of which are not entirely evident, were painstakingly tracked by Cormac Bourke a curator of Medieval antiquities at the Ulster Museum in Belfast,  who made contact with the Diocesan Archives some years ago.

Knockatemple is a townland about seven miles from Glendalough Co. Wicklow, with ancient Church ruins. In 1879 a careful exploration of the ruins was carried out and several important discoveries made. The foundations of a Church were uncovered and revealed the presence of two aisles, a floor paved with large, flat stones and what was thought to be the remains of a stone altar.

It was recorded in  The Deaneries of Arklow and Wicklow by V Rev. Myles V. Ronan that this excavation also resulted in the discovery of a “square headed bell in iron, consisting of two portions the halves being riveted together; there are also traces of bronze plating.”

Archbishop Martin wrote to the National Museum of Ireland alerting them to the existence of the bell and offering to donate it to the NMI collection. Today, the ancient bell was presented to Ms Maeve Sikora, Keeper of Irish Antiquities at the NMI. Ms Sikora  noted that the NMI was honoured to receive this important donation, which she said will greatly add to the National Collection of historic hand-bells and be retained securely for future generations to engage with at the National Museum of Ireland.  ENDS