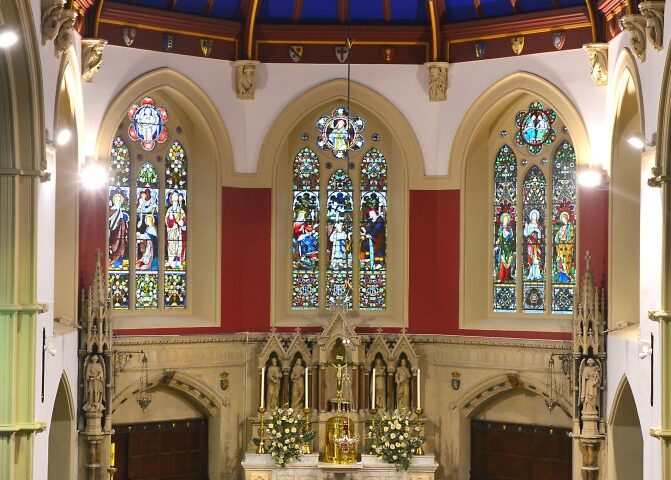 Mass for Deceased Members of An Garda Síochána in this, their Centenary Year 2022
Church of the Holy Family, Aughrim Street, 17th November 2022

We are gathered together in the Church of the Holy Family, Aughrim Street, to remember and honour serving members of an Garda Síochána who have died, and in a particular way, those who have died during the last year. We pray for those “who have died in the hope of the resurrection” because—as St Paul says—the life and death of each one has its influence others” (see Romans 14:7). You—women and men who serve together in difficult situations—know the truth of this. You are people on whom others depend in moments of trauma or loss, or when that dreaded moment comes, and they cannot even begin to grasp what is unfolding around them. It is only natural then that the bonds created in such situations, tug on our hearts when we remember colleagues, and more than colleagues, friends—safe shelters as the Book of Sirach calls them (see Sirach 6:14). Yes, “the life and death of each one has its influence on others.”

We pray that they may rest in the peace and steadfast care of the One who created us all. Parting from them was very difficult, and it is right that we should give ourselves the quiet comfort of remembrance.

Human life in general, and your service in particular, is built upon the virtue of hope. There is an important distinction to be made between hope and optimism. The horizon of optimism is human; hope, however, has a broader horizon, one that might be termed spiritual. At times, in the course of your work as member of an Garda Síochána, you may not always be optimistic about the world, or about society and its tendencies. At no time, however, should you be without hope for the future of our society lies in a lifestyle of service which is constantly attentive to the needs of others. Addressing police officers earlier this year, Pope Francis put is simply: “your vocation is service.”  He observed the specific mission “is expressed in service to others and commits you to correspond every day to the confidence and esteem that the people place in you” (6th June 2022). Hope recognises that there are tragedies in the world—sickness, accidents, violence and natural disasters—but it also looks to “the resurrection of the body” and “the life of the world to come” (Nicene Creed).  Hope prompts you to ask not just why your colleagues and family members died, but why they were born in the first place. If heaven is union with those that whom we love, then was their presence in their families, in the stations and units to which they belonged, in the communities they served not a foretaste?

The second crucial moment occurs about a hundred years after the founding events. Three generations have passed and the “grandchildren” are running things. This is a time of negotiation and re-negotiation of a group’s history, customs, and identity. It is there we find ourselves now. Our future is not our past, but our future is intimately related to our recognition and negotiation of our past. Indeed, only with a recognition and acknowledgement of where we have come from, can we cease to live the past; only in this way can we embrace a worthy, liberated, and liberating future.

On this day—a day rooted in the remembrance of those who have given so generously, and a day with such a strong overture to a shared future, we do well not only to remember and give thanks, but also to hope. In the Christian faith, the resurrection of Christ gives his disciples a new horizon—a horizon of hope. The Christian sees further than the grave.  “Unless the seed falls in the ground and dies, it bears no fruit.” (John 12:24) May the courage and generous service of your deceased colleagues and friends not only give you consolation, may it also inspire your service in this Ireland that unfolds before us, and beyond.

May the light of Christ brighten our way to each other, may it conquer the darknesses that threaten, and that seek to undermine the freedom and dignity that lie at the heart of our shared life as a people, and as a nation among the nations of the world.  May the power of him whom God brought through death, bring us safely into the place our Father prepares for us—that welcoming house of many rooms (John 14:2).