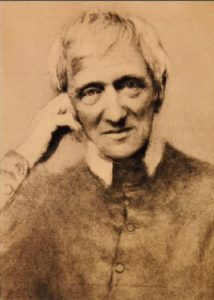 On Sunday 13 October Blessed John Henry Newman will be declared a Saint by Pope Francis.  Blessed John Henry Newman was  the founder of the first Catholic university in Ireland.  He served as the university’s first rector (1854-1858).  In his 1993 Encyclical Letter, Veritatis Splendor (The Splendour of Truth), Pope Saint John Paul II, explaining the relationship between conscience, individual freedom and the duty to adhere to objective truth, quoted Cardinal Newman and described him as ‘an outstanding defender of the rights of conscience’.

On 19 September 2010, during his Papal visit to Britain, Pope Emeritus Benedict XVI beatified Cardinal Newman in Birmingham, saying during the Mass of Beatification that he was ‘a man of gentle scholarship, deep wisdom and profound love for the Lord.’

On 11 October, Archbishop Diarmuid Martin will deliver an address on Blessed John Henry Newman at the Pontifical Irish College in Rome.  This event is being jointly organised by college staff and the Ambassador of Ireland to the Holy See, His Excellency Derek Hannon.

The Diocesan  Office for Catechetical Formation has produced a leaflet of Prayers and Reflections of John Henry Newman, which you can download for printing off here:

Celebration of the Canonisation of John Henry Newman

Archbishop Martin will preside at the 6:15pm Mass on Sunday, 20th October, with uplifting music by the Newman Vocare Enselmble  and the Carolan String Quartet

Following the Mass, Declan Kiberd will give a talk entitled “A Saint for Today” beginning around 7:30pm.

The evening will wrap up with a festive reception in the rear of the church.

The Life of John Henry Newman

May the Lord support us all the day long,
Till the shades lengthen and the evening comes,
and the busy world is hushed, and the fever of life is over,
and our work is done.
Then in his mercy may he give us a safe lodging,
and holy rest, and peace at the last.