Homily notes of Most Rev. Diarmuid Martin  Archbishop of Dublin

52 Years have passed since that first World Day of Peace. The world situation has radically changed. 1968 was marked by a Vietnam War that seemed intractable. Ireland was troubled. People were fighting for legitimate political independence. Wars were taking place in almost every continent. Europe was trapped in what seemed an intractable tension between two ideologies, heavily armed and with frightening nuclear potential. The world was far from being a safe place.

Over the years, progress has made and many countries have fortunately returned to peace. Looking back, however, it seems almost inevitable that when peace is attained in one place, war raises its head elsewhere. Many attempts at attaining peace that seemed successful proved to be short lived and unsustainable.

This year Pope Francis placed as the central theme of his message “Peace as a Journey of Hope”. Is peace a realisable hope? What are the conditions that make peace sustainable? Certainly sustainable peace is a dream that has haunted the people of this earth for centuries.

Think of the dream of the Prophet Isaiah,

“[Peoples] shall beat their swords into ploughshares, and their spears into pruning hooks; nation shall not lift up sword against nation, neither shall they learn war anymore”.

Will peace always remain an unrealisable dream? Is there some key towards moving forwards?     In his message for this year’s World Day of Peace, Pope Francis notes,

“Hope is the virtue that inspires us and keeps us moving forward, even when obstacles seem insurmountable”.

Hope is not just a pipedream. It is a journey that opens up possibilities that seem unimaginable. Hope is the mark of true peacemakers. They are the ones who refuse to think that peace is impossible or that peace can only be maintained by a logic of reciprocal armed or ideological confrontation.

Coming to this Church this morning, my thoughts turned toward your former Parish Priest, Father Tony Coote. What struck all of us about Tony in his dramatic illness, is that even in the face of the inevitability of death he never abandoned hope. If anything he gave others hope. The more his physical abilities faded, the stronger his witness became. Hope is the virtue of the strong.

Hope is not a pipedream. Hope is realism.   It is a journey that reaches out and touches hearts. It aims at reducing the tensions and the intolerance and the misunderstandings that give rise to thoughts of vengeance.

However, peace must be built up continually. Peace is a construction that has to be carefully monitored and nourished and renewed. The tolerance that led to peace can be undermined quickly.   History can be read through the lens of different memories. The hard-earned common memories that led to understanding and respect can be quickly undermined by a malicious and deceptive rereading of the same history.

Reality can be read in ways in which we can justify a journey that deprives people of hope. The decades-long persistence of conflict and of violent and immense civilian suffering in some African countries is linked to unscrupulous exploitation of natural resources for economic interests.

Lack of respect for difference can undermine even peaceful societies. Fear of the immigrant can be exploited in terms that support narrow populism. Racism and intolerance are dangerous explosives that we only play around with at our own peril.

In his message for this year’s World Day of Peace, Pope Francis places the idea of ecological conversion at the centre of the endeavour for peace. Ecological conversion is about an integrated understanding of human dignity, the unity of the human family and care for the creation given to us in trust by God as our common home. Such conversion can generate new and different relationships between people.   Our young people understand this in a way that my generation failed to do.

A culture of encounter between peoples and of encounter with creation shatters the culture of conflict. The Pope urges Christians to seek the gift of the Spirit “to prompt us in ways of thinking and speaking that can make us artisans of justice and peace”. For believers that culture of dialogue and harmony is a mirror of the unconditional love of God.

May the God of Peace bless us and purify his Church from intolerance and abuse. May we never lose the gift of hope and may God bless those whose hope is put to the test.

May Mary, Mother of the Prince of Peace and Mother of all the peoples of the earth, whose feast we celebrate today, accompany and sustain us at every step of our journey of reconciliation and hope. ENDS 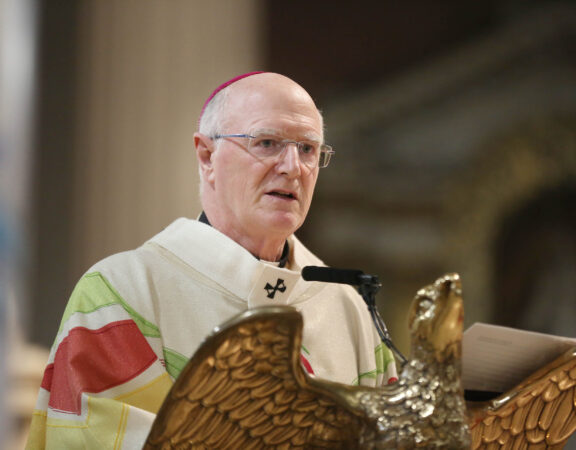