“Dublin in 1869! Dublin in 1869 was a troubled city.    In October 1869, just days before this Church was opened, there was one of the largest publicdemonstration ever held until then in Dublin callingfor an Amnesty and release of Fenian Prisoners. The British Authorities were troubled at the growth of the Fenian Movement.  Members had been executed and others sent into exile in Australia.

What else happened in 1869?  The First VaticanCouncil was opened on 8th December 1869. That is interesting because the dedication of this Church must have been one of the last important events that the then Archbishop of Dublin, Cardinal Paul Cullen,celebrated before setting out on the long journey toRome to attend the Council at which he played an important part.

Despite the difficulties of such long travel in those days, Cullen went often to Rome. Three years before the opening of this Church, in 1866, he had been in Rome to be created Ireland’s first Cardinal.  The crozier that I am using today and has been used by the Archbishops of Dublin for many generations was a gift given to Cullen on his nomination as Cardinal and therefore was most likely used by Cardinal Cullen at the opening of this Church.

The Gospel reading we have heard is a Gospel that is linked in another way to the First VaticanCouncil because it was that Council that proclaimed the Infallibility of the Pope.  Again Cardinal Cullenplayed a special part in the formulation of that Dogma.

The dogma was an attempt to make clear in theological terms what the consequences might be of that affirmation of Jesus that the disciple Peter was tobe the rock on which the Church was to be built.  Peter would be the one who would ensure that the Church of Jesus Christ would never be underminedin its history.

The definition of Papal Infallibility was a controversial dogma, for cultural, political and theological reasons. The Bishops at the Council did not universally welcome it.  Many left the Councilearly in order not to have had to vote publicly againstit.  Many theologians considered it inopportune to proclaim such a dogma that could be misunderstood by other Christians. The dogma was published just at the moment when the Italian troops entered Rome and ended the temporal rule of the Pope and obviously the dogma of infallibility was open to political misinterpretation and abuse.

However, it would be wrong for us today at this celebration to start out from those final words of today’s Gospel.  We have to look first of all at the question – or even one could say the challenge – that Jesus poses for his disciples. “Who do people say the Son of Man is?”  It is not that Jesus wants to hear local gossip concerning what people are saying about him.  He is teaching and testing his own disciples.

Already in the formulation of Saint Matthew that we have heard, Jesus is leading the disciples towards the type of answer he wishes.  The term “Son of Man” in tradition is a term that affirms a messianic identity.

The question “Who is Jesus” is a perennialquestion.  It is a question that has been asked in every generation and is still actual in today’s world.   Who is Jesus Christ today, and where do we discover his true identity?

One of the temptations of our contemporaryworld is that each of us tries to create a Jesus of our own, a Jesus who suits us and a Jesus that pushes aside those aspects that might puzzle and challenge us.

The message and the identity of Jesus however is not one that we can encapsulate that easily.  If we feel that we can define our own Jesus, the risk is that in the end we end up just with ourselves and are not open to the challenge of finding the true Jesus who never ceases to challenge us.

In today’s Church we encounter some who through fear and insecurity become entrapped in their own idea of orthodoxy and doctrine and become judgemental and closed to the ongoing challenge and search that belongs to the nature of faith.

Ireland today is unusual in that a growing secularism is accompanied at the same time by a culture still steeped historically in religious valuesand practices.   In such a situation, it is easy to create in society a form of civil religion open to all. The Church provides a space in which people, even though secularised, can share the events of their lives and find a ritual to express the more profound human experiences of joy, sorrow or fear. However, if the Church becomes just a place where people gather to celebrate human experiences without a deep reference to God, then this civil religion also ends up by being empty and does not respond to the search for God who is missing in the lives of many.

There are then those who feel that a pluralist Ireland must necessarily be a secularist Ireland and therefore religion must be kept entirely to the private sphere.  Young people today growing up in such a cultural climate may end up never even asking in depth the question about who Jesus is and what can he mean for my life.  Jesus becomes marginal or irrelevant.

Who is Jesus Christ and where do we find him?   The disciples know that even in their own time there were many different answers to the question about Jesus.  The answers were however not entirely on the wrong track altogether.   The answers identified Jesus within the prophetic tradition that accompaniedGod’s people throughout history and wouldculminate with the coming of the Messiah.

We can look for Jesus in the wrong place.  If we look on Jesus just as a cultural or a political figure then we will never come to understand him.  We will only understand Jesus in the overall context of his presence and activity in the Church, the place where we encounter his saving history especially in the Eucharist and the Sacraments.  We can understanding that saving position, however, if we as Church community also live what is written in our first reading: “Have a care for justice, and act with integrity”.

Our celebration this morning of 150 years of the history of this parish, like any occasion in which we reflect on history, is not so much a looking backwards in history.  It is more a looking towards afuture in which the good things that we have inherited from those who went before us can be translated into good things and good lives for us and our times and for the generations to come.

We give thanks this morning for those who 150 years ago had the courage and the foresight in difficult financial times – not long after the famine – to build such a beautiful Church.  A Church building, however, is not an architectural museum.  It is the place where community is built, where people receive the light of the Gospel at difficult times and in times of creating vision for their lives and for society.

The celebration Chalice, that I will bless and use in the Eucharist for the first time, is a sign of thebond between faith and life that is established in the Eucharist.  May it be sign of the goodness that comes when we faithfully follow Jesus and be a sign of renewal of faith in this community.

I thank all those who have prepared this Jubilee event.  We remember those who have led this community of faith over the years, priests, lay men and women, and religious. We pray for our young people that they may be challenged by the way we live to pause and think about the Jesus we represent and open their hearts to that faith was has enriched this community of the one hundred and fifty years of its existence. 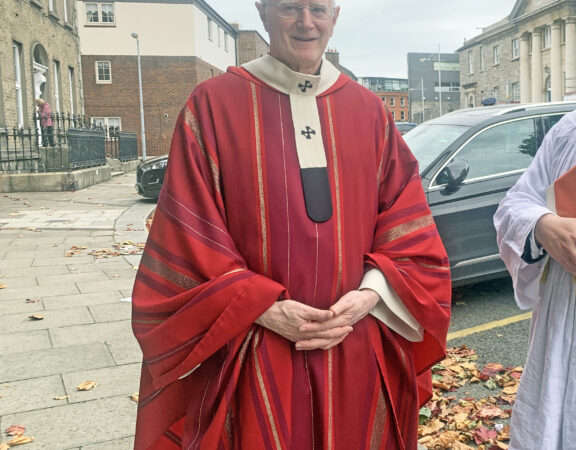 Solemnity of the Assumption – Homily of Archbishop Farrell